Day one
Commenced with a private tour of Dominio de Pingus, which was very hard to find just off a back street in the village.

Winemaker Patricia Benitez took us first around the super modern science labs including PCR machine! The scientists among us were already drooling even prior to the barrel samples of Pingus and flor de pingus 2009. A fascinating insight into one of the worlds most expensive ‘garage wines’.

We were whisked off to the ultra modern Bodegas Alion (Vega-Sicilia). Purification answered every last question, valiantly, from the density of the grain of French versus American oak to the concentration of TCAs on corked samples. Then to the exotic Japanese Gardens of Pablo Alvarez’s Vega Sicilia, and finally the private tasting from immaculately pristine top range Riedel-Alion 2005, Valbuena, Unico 2000 and the most mindblowing luscious marmalady Tokay 2002. This was going to take some beating!

Off to Bodegas Protos – a very much larger more modern, and somewhat colder operation.
Impressed by winemaker Maria but the wines were disappointing. In fairness they did have a very hard act to follow.

Day two
Viejo Coso by Jesus Ramos who descended from his castle in Curiel de Duero to show us his maturing barrels in a converted church with 2m thick stone walls. Then off up to the spectacular castle-hotel, hundreds of feet high on a limestone escarpment. Amazing setting, interesting toilets and good quality wines. He kindly invited us back for lechazo (baby lamb stewed for four hours) and Champions League final.

30km by bike later and to the highlight of the trip -Juan Carlos Vizcarra, Bodegas Vizcarra.

Coso Viejo
Vinification takes place in Peniefel, followed by aging in barrel and bottle in a restored church with 1.5m thick walls. Our tasting took place in the hotel Coso Viejo also run by Jesus, a restored castle on the hill with fantastic views over the valley and back towards Peniefel. Hotel Coso Viejo, Encarnacion 9, 29200 Antequera, Spain

Jesus ages his wines for longer than the minimum stipulations for Roble, Crianza, Reserva and sells 70% of his wine in Madrid and the rest to central Europe.

Crianza 2003 released 2008.
Again a bricky rim, blackberry fruit, compost and vegetal notes on the nose, smooth with plenty of tannin on the palette, needs food as many of these wines do. Opens up on returning to the glass later with caramel and more complexity. Very tasty. For 9 EU a bottle fantastic value. **

Reserva 2001 released in 2006.
A sweet nose, vegetal with hints of spice and caramel, nice and interesting. Soft and smooth on the palette, quite long, a lot of tannin has dropped away. Some still present, but the fruit is disappearing. A little rioja like. We returned that evening for chuletas, baby slow cooked lamb at the castle, which was accompanied perfectly with another couple of bottles of the Reserva which really came into its own. Again at 12 EU a bottle certainly the best value wine we had delivering loads of please.**

Bodegas Vizcarra
As we cycled back from Roa del Duero through Mambrilla wondering how we were going to find our last appointment of the day, we noticed some guy in a tractor in a field shouting and waving at us. It turned out to be Juan Carlos, owner, oenologist, winemaker, PR department, labourer and everything else at Bodegas Vizcarra. An inspiring and passionate man who has since our meeting pipped Cantona as Adam’s all-time hero. 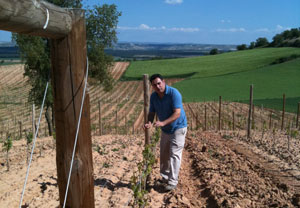 Having visited four fascinating wineries and learnt all about winemaking in Ribera, and after a rather large lunch in Roa we thought we knew what to expect. But from the moment Juan Carlos stepped off his tractor to when we left three hours later it was clear that Bodegas Vizzcarra was something very special.

We visited the vineyards themselves and heard about the low yielding old bush vines and the younger row planted vines, also the different soils and positions in the valley. In the new winery, JC explained his use of larger new oak barrels to encourage a more gentle expression in the wines. We tasted 2009 from the barrel and were privileged to visit JC’s family cellar in the town and taste a mature bottle of one of his premier wines.

Senda del Oro 2009 from barrel
Fruity nose then packed with fruit, chewy yet fresh, tasty and balanced, nicely under oaked. **+

Torralvo 2009
From 55 year old vines. This is the wine where JC is aiming for the perfect Ribera Reserve, made in bigger barrels to temper the effect of the oak. Full fruity, concentrated with a mineral undercurrent, powerful, viscous with a long lingering fruit aftertaste.  ***+

Celia 2009
Some Garnacha in the blend here again in big barrels with attractive pink metal bands (Celia’s favourite colour?) This wine is more feminine and refined in every respect, even delicate following the Torralvo. Compact and a little closed but beautifully balanced dense complex core and soft lingering tannin at the end. This has amazing potential. ****+

Innes 2009
This blend has a10% merlot in it and again a long maturation in large barrels. Wonderfully cool and fine textured, sweet and compact, with plenty of tanning, a great mouth feel.  ***++

Celia 2003
Delicate nose, sweet with hints of the savoury/sweet plum sauce one gets with crispy duck, complex and powerful in the mouth, soft tanning, very long and persistent on the palette.  Evolves in the glass, passing through waves of sweet fruit flavours and savoury soy notes.  One of the best of the trip, absolutely delicious!  ****

Torralvo 2006
Bit closed to begin with but opens up with fruit, limestone and persistent nose, then in the mouth, wow! Big, intense, powerful seemingly endless, good balance, and so very, very tasty.  ****

By the time we got to these last two we all gave up spitting – the wines were just too good. When we finally got back on our bikes, and JC got back into his tractor, there was not a drop left.