This was a very Informative masterclass presented by Martin Kaiser Director of Viticulture and Winemaking at Dona Paula. It featured a mini vertical tasting of their top wine, Selección de Bodega. Patrick Schmitt MW also provided a valuable insight.

Mendoza was founded in 1562 and Spanish settlers planted wine for sacramental purposes.

Argentina gained Independence from Spain in 1816 which led to a new wave of immigrants. The population rose from 2 to 8 million between 1869 to 1914. In 1865 Miguel Pouget brought French varieties to Mendoza.

There was later another wave immigration and the population became the largest wine consumer in the world in 1980 112 Litres per person per year!

Don Paula was founded in 1997 with French and Chilean investment

The vineyards are high altitude with a dry continental climate as they are long way from the Atlantic and Pacific. Rainfall is low.

Martin talked about using a number of studies including Electro conductivity affected by Water running down slopes moving stones.. Studies can map out best areas and aid in where to plant

Black fruits and florality, soft tannins cheeks and palate, nice acidity and balance, lively but not as seductive as 2006, slight meatiness in nose ? 2y limestone in soil. Savouriness provides the match of Malbec and steak with finely chopped herbs

Not the fatness fullness richness of the 2006 but delicious too.

It was Interesting to compare the effect of different altitudes and soils.

There was a certain meatiness/meat juice bloodiness in the 2012 possibly reflecting the limestone soils and I can see why Malbec is often the perfect match for steak.

I am most grateful to Martin Kaiser and Patrick Schmitt MW for the excellent presentation and Isabel Distin from The drinks business for the kind invitation.

This was an excellent preparation for our forthcoming WanderCurtis wine dinner on Thursday 27th October with Zuccardi wines from Mendoza. When quizzed about Malbec next week I’ll have more idea!

Alberto Zuccardi, planted the first Zuccardi vines in a small plot in the Maipu region in 1963. Located in the Uco Valley, Mendoza which is at the foothills of the Andes Mountains in Argentina

They were voted The World’s Best Vineyard in 2020. Sebastián Zuccardi the third generation of the family, continues the family business and is one of South America’s finest winemakers. He added a Research and Development Wing in the family winery, to learn and analyse more about the terroirs.

They are known to produce some of the highest quality of wines in South America. The vineyards enjoy the benefits of altitude and a cool dry climate throughout the year. They are high-altitude wines (from grapes grown at least 500 metres above sea level). At high-altitudes, vines get more sun during the day and are cool at night. This diurnal variation intensifies the flavour of the grapes. Zuccardi’s San Pablo vineyards are situated 1500m above sea level. Their Paraje Altamira vineyards are at 1,100 metres altitude.

We had a selection of their brilliant wines including their single-varietal estate wines primarily made from Malbec with a matched three course menu.

Nico had flown in that morning from Mendoza. Zuccardi had been elected for the Hall of fame the night before. He gave a great introduction into Zuccardi and amongst other things discussed ageing in new concrete eggs.

Zuccardi Valles Torrontes 2020 Beautiful florality and fruit. A perfect match for the gentle spice of the prawn piri paparadelle 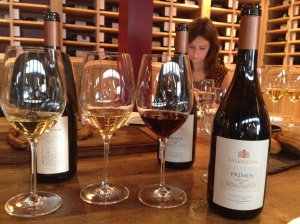 Salentein Bodegas were pioneers of the Uco valley of Argentina and have 15 vintages under their belt. Chief winemaker José Galante previously of Catena Zapata presented their premium range of wines produced from the bodegas’ three different vineyards, each at different altitudes. San Paulo the highest at 1600m plus producing pinot and chardonnay, La Pampa at 1200 to 1400m and El Oasis at around 1000m. Irrigated with mineral water off the mountain!

On the palate: blueberries, blueberry pie, nice freshness and length.

On the nose black fruit, cocoa powder, coconut, toast complex and lush.
Lovely full bodied, luscious ripe blackberries, a complex fruit compote topped with coconut & cocoa powder, this is a pudding in its self. A rich delicious power house of a wine.

In summary the single vineyard wines are more restrained and probably appeal to those with an old world bias, whereas the Primus ‘blends of the best’ are unapologetic celebrations of ripe fruit & textural richness. Though I loved the Malbec Primus the Numina Cabernet Franc was probably the wine of the tasting for me, embodying the old world qualities of freshness, elegance & structure with the pure fruit clarity of the new. 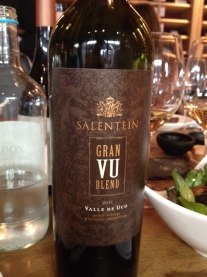 The first of hopefully many more tastings featuring over 100 fine wines exclusively from the ‘New Word’.

Overall impressed by some great examples of fresh and refined wines coming out of Australia, skipped the New Zealand wines as I am such a big fan already (Craggy Range in particular  not considered for being too good!) and unfortunately didn’t have time for the South African.  Highlights included:

The Laird (Shiraz) 2008, Torbreck, Barossa Valley, Australia.  Made from vines over 100 years old, pre-phylloxera at extremely low yields. This wine was dark and inky with an incredibly persistent nose of rich Xmas cake. In the mouth a texture and complexity reminiscent of a Pedro Ximenez solero but not so sweet but a bit like a dessert. Long intense finish.  Amazing with a price to match!

Catena Zapata, Malbec Argentino 09. A blend of two vineyards, characteristic malbec plumbs and berries and a bit of toast & coffee on the nose, then wow! A delicious blend of fruit, coffee, chocolate and creaminess in the mouth, luscious and so easy. 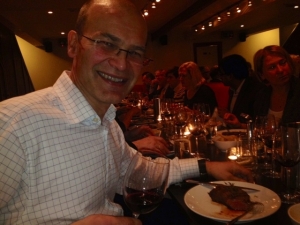 We welcomed the generous and charming Guillaume of Bodega Raffy

Delightful wines of 2010 and 2011 Cuvee terroir and Reserva

The Bull Steak Expert delivered the most fantastic rare Cuadril and we would highly recommended try them out for dinner and explore their well stocked cellar of Argentinian malbecs: http://www.thebullsteakexpert.com/

We were honoured to have as a guest Minister Alejandro Pineiro , Minister economic and commercial section from the Argentinian Embassy who loved the wines and the evening.

Lovely sensuous, spicy stewed plum, poached pear with cloves, bit of toasty oak, complex on the nose.  Then broad and rounded in the mouth with more of the same sweet and savoury lusciousness! Delicious and decadent. Great Value.

Also fresh with slightly less clean fruit than the 2010 but the same fantastic lift.  Some mushroom notes on this one which promises some interesting development in a year or two.  These wines are perfect partners for food you can almost sense the high altitude clean air they come from.

Another really well balanced wine, nice toasty oak but not overwhelming the fresh berries and fruit.  No over extraction here; intense, long & savoury but balanced by good acidity.  Will be great.

Full tasting notes of the other wines available shortly

Malbec has found its home in Argentina, producing powerful, aromatic, dark coloured robust wines. We were delighted to have Guillaume Raffy present his families wines which originate from the Tupungato region of Mendoza adjacent to the Andes.

Bodega Raffy has recently been awarded with a Decanter regional trophy for the best Argentinian Malbec. The vineyard is at 3,500 feet, with a sunny, dry climate fed by waters from the Andes glaciers, perfect conditions for this award winning Malbec.

We tasted  the Cuvée Terroir  and  the Reserva Red  There were other surprise wines  on the night.

The tasting was served with a  two course dinner including the finest Argentinian steak, at the Argentinian restaurant The Bull Steak Expert. The executive chef is Daniel Veron who was the youngest head chef in Argentina.

A very big but delicious wine made from malbec, cab sav, merlot and syrah. Dark fruit, plums, spice and toasty coconut, rich and tasty. Apparently made with Michel Rolland’s input, this will appeal to those who like forward, blockbuster wines. I know it’s cooler to prefer more refined, complex and intellectually challenging wines, but on a week day when you want a reliably tasty treat this is just the ticket. (Waitrose).

Unfortunately only available at Gauchos restaurant or their wine shop in Piccadilly (Cavas De Gauchos), just gorgeous, smooth, full bodied, chocolatey, fantastic Malbec from Argentina. Shared in Gaucho Manchester with my sister Berlinda who quite brilliantly summed it up, “This wine is a meal in itself!” So true, but didn’t complain when the ribeye arrived!

The best way to combat a rainy, slug pellet laden day in May was to crack open a bottle of this fine Argentinian Malbec. A very impromptu WanderCurtis tasting chez le allotment with fine Aberdeen Angus burgers and bbq chicken wings. Rich, dark, packed with fruit – a fine example of Malbec. Available at Swig Wines for about £12.