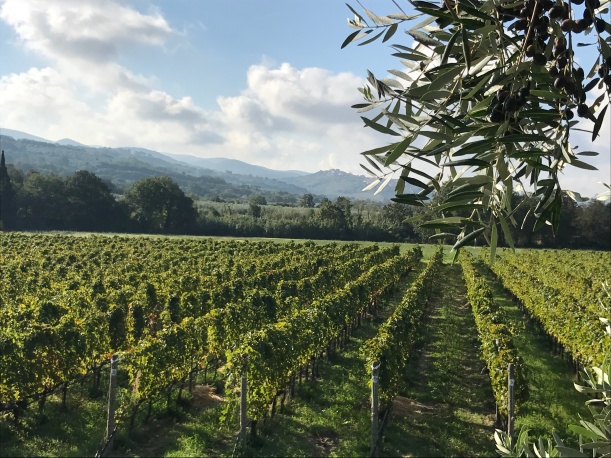 When Marquis Mario Incisa Della Rocchetta acquired Tenuta San Guido in the 1930’s,  few thought it would inspire a cult of wines which were to follow some decades later. The  coastal plain forming the western border of Tuscany was essentially marsh and swamps. It was know for its malarial Mosquitos. However after the draining of the Maremma it made it possible to grow crops.

The early wine product at Tenuta San Guido was for family consumption. After a visit from a member of the Antinori family, the quality of wine produced was realised and they were persuaded to attempt commercial production. The First vintage of Sassicaia in  1968 was sold as a Vino da Tavola. The 1985 vintage was a revelation and sparked the whole Super Tuscan phenomenon. Marquis Lodovico Antinori was not to be outdone by his cousin and created Tenuta Dell’Ornellaia in 1981. A special DOC Bolgheri was  created in 1994. There were only seven producers ‘ the magnificent seven ” up until 1990 there are now forty five.

There area is now renowned for some of the best wines in Italy. The famous Massetto from Ornellaia can fetch £ 1000 per bottle. . IGT Toscana was created in 1992 following inflexibility of the DOC system allowing a higher range of varieties. It was devoted to Bordeaux varieties  with a small amount Syrah and Sangiovese. Alex Heinz Winemaker at Ornellai describes Bolgheri as a Mediterranean version of the Bordeaux climate, a wine of the South. It has a special combination of ripeness opulence and freshness.

We arrived at the modest gated B+B Relais Felciaini0. It is perfectly located for visiting the local wineries on the Strada Provinciale Bolgerhese about 6km  South of Bolgheri and north of Castagnetto Carduccio. Bikes were delivered for us from Ciclosport.

Established in 1981 with its first Vintage 1985. It became one of great names purchased by the  younger brother of Marchese Piero Antinori family with an interest from Mondavi. It is   now entirely owned by the Frescobaldi family. They own two separate vineyards- home vineyard,  surrounding the winery and Bellaria to the south. Four wines are made-Ornellaia 8,000 cases, Masseto 100% Merlot from Masseto Hill, clay based soils. A separate building is under construction for Masseto alone. Le Serre Nuove 2nd wine, Le Volte Sangiovese Merlot and Cabernet Sauvignon.

Arturo met us on the landscaped courtyard explained the etymology of the word Ornellaia. Aia meaning place of and Orniello, a type of local flowering ash tree. 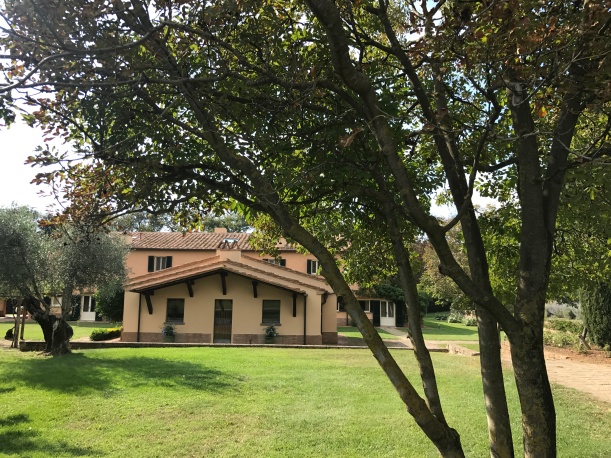 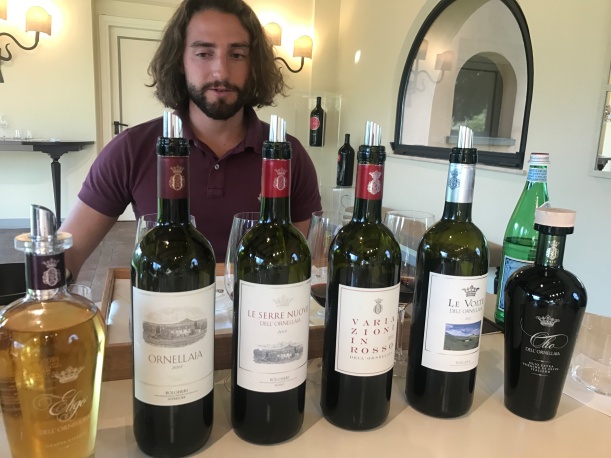 Ornellaia olive oil tasting Blend of 15 oils from the estate harvest going on as we visited. Spicy, smooth, kick at back of throat peppery.

Eligo grappa Arturo suggested we rub it on our hands allowing the alcohol to evaporate then smell it- nuts  figs pistachios ground baclava hazelnuts. This was a first for all of us and a very entertaining way to finish our visit to this iconic property

This is very much a boutique artisan operation.It was Started by Franco Batzella and Khanh Nguyen who previously worked for the world bank initially buying land in Montalcino. They have a small but very well maintained and low yielding vineyards ( 1 kg =1 bottle per vine)-1ha Cabernet Franc, 1ha Syrah, 5 ha Cabernet Sauvignon and 1 ha white varieties. We were greeted at the gate by Khanh and their rather excitable dog.Franco Batzella soon arrived. He explained how he yearned to return to his native Italy after retiring from the World Bank to embark on a dream.

The passion from Franco and Khanh became clear. The winery was in full action. They were transferring the wine from stainless steel  into oak barrels. The Harvest was 2 weeks ago 1kg per vine = 1 bottle per vine!He gave us a detailed explanation regarding transfer to barrels and fine lees and different levels of pressing with all parcels vinified separately.He has stared using slavonian oak 20,000l with good results as consumer taste goes away from excess oak.Oak forest in France were used by the French navy for building ships, later for oak barrels. when transferred from France to Britain on ships it was found  it tasted better on arrival.The area is a  mixture of sand clay and  alluvial soils, so good drainage despite the flat plain like Bordeaux gravels. Mostly spurred cordon 80 cm up then bent 80 cm 5 spurs allowed on that.

Franco hosted our tasting on his lovely  terrace overlooking Castagnetto Carduccio as the sun set.

In the Evening we walked to the local restaurant- Osteria Magona all the meat is supplied by celebrity butcher Dario Ceccini based in Panzano in Chianti. We shared a 1.4 kg aged Fiorentina T bone and a large cut of Panzanese steak.. Oh to be back in the gastronomical heaven of Italy!

Wines with dinner at Osteria Magona Poggio al Tesoro Sondraia,Le Macchiole Rosso,Castello Giaconda  Montalcino2012. We highly recommend this restaurant if you are in the region. It was the perfect end to our first day in Bolgheri.