It was with great excitement that six wine loving gentlemen of various levels of fitness left London to seek the finest offerings of the great wine region of Northern Rhone.

With a mixture of serendipity and brazen I had got us an invite to Maison Chapoutier for a party the night of our arrival.

Having attended an M.Chapoutier masterclass on Monday In London I sought out the fun loving forthrightly spoken Michel
Chapoutier who immediately extended a warm hand , game on.

It started with the style we intended to continue.
First class Lille to Valence in an area of the carriage akin to a private boudoir.
Stuart , our travelling sommelier , invited as much for his cellar collection as his fine North American sense of humour (but certainly not for his wind capacity.)
The indulgence commenced immediately with Kiran’s beautifully blown finely rimmed plastic glasses.
Out came my  J L-Chave celebre  St. Joseph , 100%Roussane courtesy of Yapp brothers recommended by the  lovely Bianca Ford. 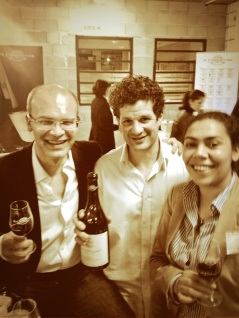 Tim’s great analysis of it ..Peaches and cream just like a dream!
Then the J L Chave Hermitage 2004 , see tasting note for full description .This took us to a new level of euphoria.
We questioned the possibility of illicit substances having been added, as we all developed and enhanced sensory
and analytical level .Even the softly spoken, muscle strapped Gerald seemed truly in awe commenting
‘you just want more and more of this’
With a blindly tasted Paulo Scavino 2001 Barolo the journey flew by.
We soon found ourselves on the banks of a wild ,gushing Rhone at le Chateau in Tournon .

This was just the general wine list.
Michel  came over to say hello and insisted we be served Le Pavillon.The delightful Nelly France , Michel’s export director who never left us all night, proceeded to bring a selection of vinous miracles. Le Meal Hermitage 2006 , Le Pavillon 2000 L’Ermite . All washed down wit-.

We danced and partied on , what a welcome to Rhone , Merci bien Michel Chapoutier ! 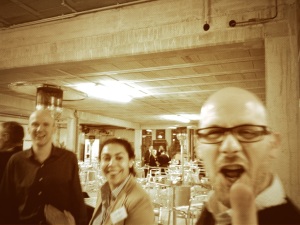 Crossed the river to Tournon in the early hours , and soon wished I had brought some ear plugs.

The forecast was poor but are spirits high. We headed to Jaboulet. The charming aptly named Jean Luc Chapel took us up Hermitage to La Chapelle.
Wonderful views and a topographical history lesson of the vineyards of Jaboulet .This was followed by a private tasting of 8 wines ( see Jaboulet wine event for tasting notes)
and hugely generously opened a La Chapelle Hermitage 2007 for good measure. Lunch of Fromage , Charcuterie and beautifully ripe heritage tomatoes rprovided in Jaboulet .
The six of us warmly satisfied having been treated royally.

Then to Maison Chapoutier where the fabulous Nelly treated us again to a stunning portfolio of their wines .Highlights including Cote Rotie la Mordoree (full details under tasting notes)
Stuart could have easily set his stall for the night, but another appointment at 4pm meant we had to drag him kicking and screaming.

The weather turned. A taxi to Cave Fayolle for a tasting.

We  then welcomed a rare spell of fine sunshine and mounted our unused bikes.Half the party ascended the imposing Hermitage La Chapelle led by Gerald Wiggins Kelly.
A leisurely ascent for the big man. Kiran and I sweating and panting behind. We were treated to wonderful views from the summit .Spring flower blossom,neat rows of beautifully tended budding vines
and the majestic Rhone river meandering serpentially across the valley floor.

The plan was  bikes in hand  by train to Vienne and follow the  lovely dedicated bike  path   V2  down the  Rhone back to Tain with various leisurely stops on route.
It was not to be.
We managed Vienne to Ampuis and took in the beautiful views. However as predicted, the weather was starting to turn .

We arrived at the congenial Rene Rostaing. We were entertained in his cellar sampling amongst many, his Condreui, Ampodium, 2003, la Landonne 2009, Languedoc 2010.

The rain increased  in ferocity, and the wind picked up. We took refuge  in Bistro de Serine ,16 boulevard des allees, Ampuis. Great lunch and some lovely wines –  Cote Rotie Gerin 2005 and 2010. Then off to GillesBarge next door. He was most generous opening many wines including  a 1992 Cote Rotie.

Domaine Gaillard in Malleval next stop.The rain teamed down , the clouds darkened ,the temperature dropped, and the wind picked up.
Five soaked sodden cold defeated men pondered for a few seconds whether to make the ascent up to Gaillard in Malleval. Only the ever stalwart Gerald showed any wish for it. We headed for the nearest train in Peage de Roussilon .Instead of our intended scenic ride by the river we found ourselves five drowned rats inhaling all manner of fume around the chemical factories of Peage.

There was only one thing to lift our mood..To engorge ourselves to bursting with chocolate.  And that we duly did back in the Valrhola chocolate factory in Tain.

A warm bath later and we were all ready for our final gourmet experience of the trip back at Le Chaudron . Pol Roger to start followed by a selection of Delas  wines including Crozes and  St Joseph and more. Served with Nuits St Jaque, sweetbreads, Boeuf fillet ,fromage de la region, pannacotta strawberries and all washed down with  Beaumes de Venice.

With  wine food and company as good as this;
Days may be cloudy or sunny
We’re in or we’re out of the money.
But we’ll love you always, we’re with you rain or shine.

Medium to full bodied, not reflecting what I expected from a hotter vintage. Slightly oily mouthfeel, candied lemon, linear, not too much acidity, reasonable balance, concentrated but slightly

subdued. Lingering waxy lemon curd is there, starting to emerge. Really intriguing, had the whole table talking. The ris de veau to accompany it… Very good.