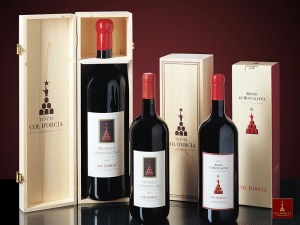 He is the owner Col d’Orcia in Montalcino , south of Siena amongst the picturesque most beautiful rolling hills of Tuscany.

Brunello di Montalcino is a world renowned wine made from 100% Sangiovese grapes  from this area. It possesses aromas of  cherries, plums, flowers,earth, coffee, liquorice and chocolate – a kind of scent which makes you stop to ponder. The Italians have a phrase for this, vini di meditazione – wines for meditation.

Most popular on the night , the phenomenal 2001 Brunello , the 2010 showing great signs too.

The Rosso in Magnums also proved very popular as sampling continued until the early hours.

The Count was happy to share his secrets  during his interview.